Ipswich, Massachusetts-born Langley Boardman came to Portsmouth, New Hampshire at the right time; a time in which the flourishing trade market allowed a new set of industries to bloom. As the population of Portsmouth rose dramatically in the first decade of the nineteenth century, so did his opportunities to create fashionable furniture for those that could afford it. His business at the corner of Congress and Vaughn street spread to real estate holdings for that entire block in Portsmouth, and in 1815 he moved into a Federal mansion on Middle Street, a few houses away from the Rundlet family. Town records show his status changing from “cabinet maker” to “merchant” by 1816, then to “gentleman” by 1822 and to “Esquire” by 1825. Boardman did not, however, relinquish his trade and never gave up cabinetmaking. Rundlet-May House is filled with exquisite furniture made by Langley Boardman who was arguably the most important cabinetmaker to come from the Portsmouth furniture trade. 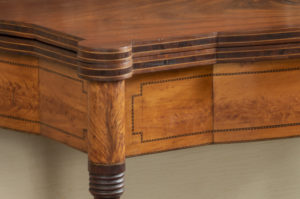 Detail of stringing and wood grain on one of the Portsmouth made card tables in the parlor.

Portsmouth became well-known for its furniture production between 1790-1820. At the beginning of the nineteenth century, Portsmouth cabinetmakers were producing some of the finest furniture in the New England. Many of these pieces incorporated intricate and complicated inlays and veneers, and many fine examples of Portsmouth furniture are found on view at Rundlet-May House.